Security has been increased around the temples of Bagan, Myanmar, to stop tourists from climbing them.

The move is to preserve the city’s 3,500 12th to 14th-century stupas, temples, monasteries, fortifications and other monuments and follows the announcement in July that Bagan had been named a new Unesco World Heritage Site.

The destination’s new status comes with strings attached; conservation targets for the site must be met.

For example, the Myanmar government has already pledged to move all hotels from existing archaeological sites to a dedicated hotel zone by 2028.

According to Myanmar news site Mizzimar, more guards have been stationed at different sites to prevent visitors from attempting to climb up the structures. 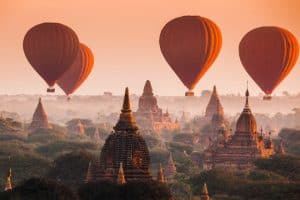 “Watching the magnificent sunrise and sunset views is my greatest expectation in Bagan,” American tourist William Wright told the publication. “I have driven around the temples for three days to search for a good spot with a brilliant view, but there are no temples allowing people to climb up at all. It’s really frustrating news for tourists.”

Many of the buildings have been off-limits since 2016, when an earthquake devastated the city, requiring extensive restoration work.

While Unesco recognition might help boost the city’s tourist appeal, locals are keen to stress that growth must be sustainable and any change community-led.

“Bagan is not only a place of sublime beauty, but a place of tremendous historic importance, that was fuelled by an energetic multiculturalism and an openness to the outside world, a place from which we can still draw lessons and inspiration,” historian and Yangon Heritage Trust chair Thant Myint U told The Myanmar Times.

“It’s important to make sure that Bagan remains accessible to ordinary Burmese people and not become a tourist playground. The Burmese student and pilgrim, not the well-heeled tourist, should be at the centre of planning.”

He added that all commercial activities should be removed from the archaeological zone.

It’s not the only new Unesco site. The UK’s Jodrell Bank and the Lovell Telescope in Macclesfield were added to the list this year.