When you book with an account, you will be able to track your payment status, track the confirmation and you can also rate the tour after you finished the tour.
Sign Up
1213

Why Book With Us?

Yandabo is a village on the Ayarwaddy River in central Myanmar, where The Treaty of Yandabo (which ended the First Anglo-Burmese War) was signed on 24th of February 1826. It is also a well known destination for the pottery making ability of its habitants: when visiting the village the guests will be able to see pots like the ones in this picture made out of the river bank clay. For Yandabo villagers pottery making is also fundamental to store water and food supplies and for this reason one person can make from 30 up to 70 pots.

This treaty financially crippled the country but the Burmese still fought two more wars before the British swallowed the whole country in 1885. Yandabo now is a village of some 400 houses, each of which is home from 5 to 10 people. Thirty of the families are potters; the other villagers are farmers, fishermen or suppliers of raw material such as clay or wood for the kilns.

The women make the pots and it’s a two-girl job with one person potting while the other operates the wheel using a treadle. The women also decorate the pots and arrange them in a circular pattern to dry. There may be up to three thousand pots in a single layer that’s covered with a large pile of ash, straw and wood then set on fire. The temperature in this kiln reaches 1200C and heating process takes three

or four days, including cooling. At the end of the process the pots have changed from dull brown to a brilliant red colour. The pots are transported by boat all over the country. 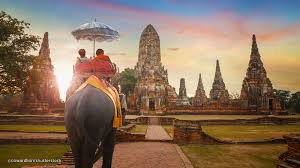